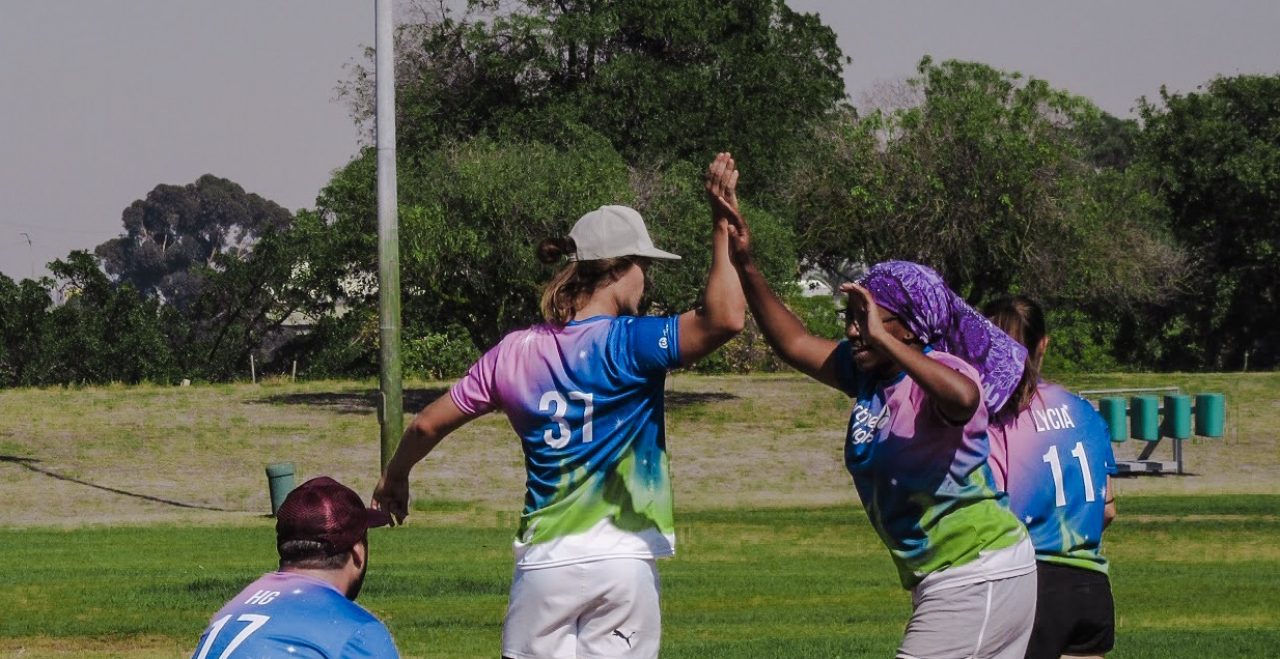 Is Northern Lights ready to get destroyed tomorrow?”

… A post by Justin on the Lights Up WhatsApp group on the night before the match.

Well, apparently the Lights were indeed ready, but it wasn’t Maties doing the destroying.

As we started the week with uncertainty that the game would be taking place due to not having a field to play on, Maties showed their dedication to ultimate by going out of their way to secure a field and making sure that the two young teams face each other on Saturday 3 March. The game took place at Stellenbosch high School, on a field that was a little smaller than a normal ultimate field should’ve been, but beggars can’t be choosers and we were grateful for the opportunity to play.

Upon arrival early Saturday morning, the sun was shining, the birds were chirping and the lack of wind made for some very excited ultimate players. With a quick, but effective warm-up, the Lights got a little bit worried as one of our ladies had not yet arrived – leaving the team with only three ladies, none of whom were ready to play savage. We quickly made a plan and after discussing the matter with the Maties team, convinced Marianne to kit up and step onto the field. A few minutes later Andrea arrived as well and we were ready for action!

With Maties opening the score with a quick first point, Lights got their head in the game by owning the second point of the match. As both teams had quite a few inexperienced players, the match was set-up to be very interesting. Throughout the match, both Maties and Northern Lights showed some skilful game-play as well as individual technique. We had the spectators on their toes with both teams constantly scoring. Lights getting the turn right in front of the end zone, called for a time-out to discuss strategy. We took advantage of the opportunity to show off a new play introduced to our team during the previous practise session – Calling Chris to Bellville, we scored yet another point. It had the Lights smiling to see that their hard work during weekly practises paying off.

As halftime arrived, Lights were in the lead (8-4) and our spirits were high. While huddling in the well-deserved shade, we discussed a couple of positives and negatives from our game-play throughout the first half. We thought it well to take away Maties’ short options and giving them the long instead, as it was apparent that they were having some trouble with their long throws.

The Lights, victorious in their efforts, ended the game at hard cap with a final score of 14-9. This was Lights’ first league game for 2018, as well as their first win for the season.

Whether it was fitness, or rather the lack thereof, the blazing sun, or just absentmindedness, contact was a bit of a problem throughout the entire match and fouls were flying like discs. With both teams being a little inexperienced (for now), travelling was also raised as an issue, along with the long periods of discussion before each pull. This was brought to light in the post-match huddle, and both teams will make an effort to improve in this regard. The comments and feedback was well received from each team, and we’re excited to show tremendous improvement in the next game. Musa was announced as Northern Lights’ MVP, while Pieter (Northern Lights) and Justin (Maties 2) won the Spirit Pants for this game.

Lights and Maties parted ways after a spirit picture was taken – each team’s spirit player having one leg in the same pair of pants, putting emphasis on the great spirit of both teams!

Until next time Maties, – LIGHTS OFF!

The morning’s events was cheerfully celebrated with some craft beer, live music and great company at the Route 44 market. Overall the day was mostly positive, with only one major negative event – Our team captain, Mal-Apple Malcolm, had to cut his game short due to a badly pulled hamstring. We hope that he recovers soon and look forward to having him back on the field in no time!

Spirit Scores for each team:

Congratulations to the Spirit players of each game, and to Musa, our MVP!!

A big thank you to Jess, who was happily keeping score for both teams.

And lastly, to our opposing team. THANK YOU for your dedication and efforts in arranging the game and for bringing it on Saturday. It was an absolute pleasure playing against you!